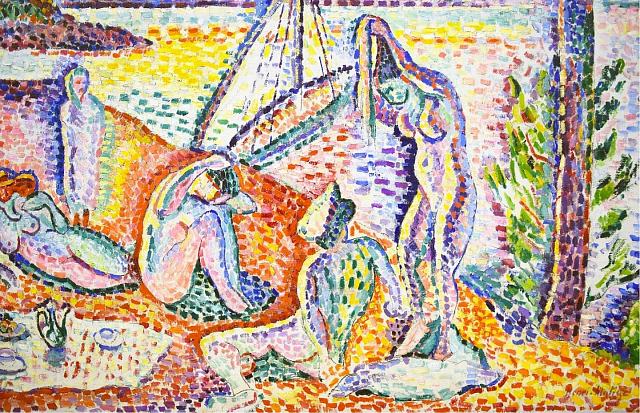 Learn all about Henri Matisse, the famous French painter and major figure of 20th century art. A draughtsman, printmaker, painter and sculptor, he was known for his bright use of colour and fluid drawing skills.

Matisse was born on the 31st December 1869 in Nord, a department in northern France. Rather than become a seed seller like his father, he studied law and became a clerk, before switching to painting. He spent a lot of time in Paris, moving in artistic circles and attending Gertrude Stein’s famous Saturday evenings at 27 Rue de Fleurus. In 1917, he moved to Nice, and largely remained there for the rest of his life, including during the Second World War. Towards the end of his life, illness meant that he had to remain seated, yet he continued to work. He died in Nice in 1954 at the age of 84.

Appendicitis was the reason Matisse started painting! While bed bound with the disease at the age of 20, he began painting to pass the time. At the start of his career, Australian painter John Russel introduced him to the work of Vincent Van Gogh, which had a profound influence on Matisse’s style. He transformed his use of color to bright, bold hues rather than earthier tones.

At the start of the 20th century, Matisse was part of a group exhibition at the Salon d’Automne (Autumn Salon), which caused controversy for their ‘outrageous’ use of bright and expressive colours. After a critic labeled them les fauves, French for ‘wild beasts’, the group adopted the term, creating Fauvism. Matisse is seen as the leader of Fauvism, with Andre Derain.

Throughout his life he traveled extensively in Europe, Africa and the US. The Mediterranean was a great source of inspiration for Matisse, particularly for its colours and light. A trip to Tahiti in 1930 had a great effect upon the artist’s style. It ‘rekindled [his] imagination’, influencing him to work with cut-outs, creating exotic shrubs and plants.

In the years before his death, Matisse converted his home into a studio and worked from his bed. He turned to the cut paper collage technique, which he described as ‘drawing with scissors’, cutting shapes into painted sheets of paper. The artist would then direct his assistants to assemble the artworks.

The Centre Pompidou, famed for its collection of modern art, has several pieces by Matisse in its collection. In Summer 2020, it was going to hold the largest exhibition of his works since 1970, on the occasion of the painter’s 150th anniversary. If you fancy a trip to the South of France, you can visit the Musée Matisse in Nice.