Tomorrow, the 15th April marks the first anniversary of the terrible fire in Notre Dame Cathedral last year. The medieval church on Île de la Cité is France’s most iconic landmark. Like the ‘Point Zero’ in front of the cathedral, Notre Dame is the symbolic heart of France. Following the article we wrote last year in the immediate aftermath and in homage to the landmark, we thought we’d share an update on the world’s most famous cathedral. 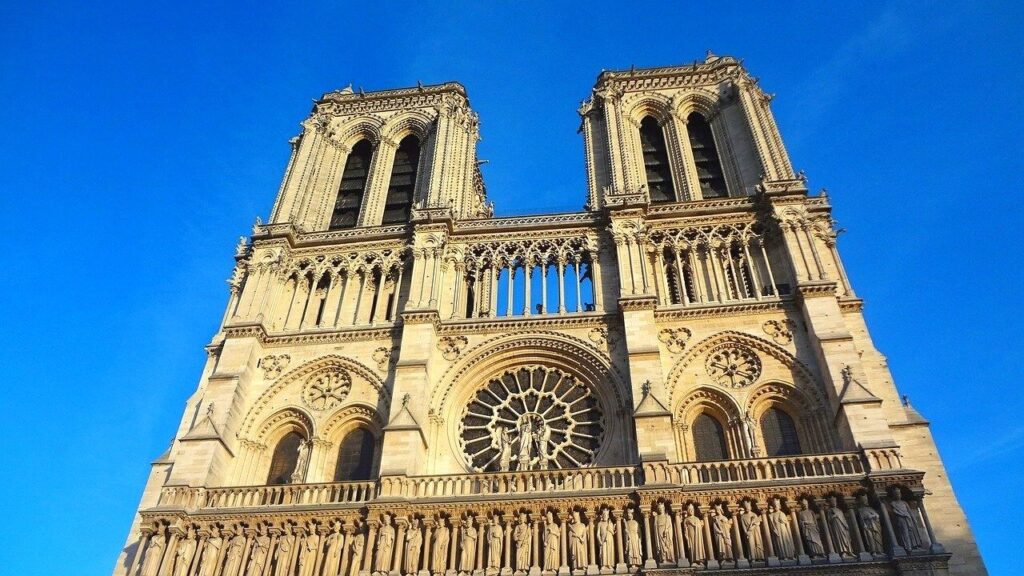 The name ‘Notre Dame de Paris’ means ‘Our Lady of Paris’, honouring Jesus’ mother, Mary. Construction to build Notre Dame Cathedral first started in 1163 under the French King Louis VII, and it has since become the most famous medieval cathedral in the world. Renowned for its Gothic architecture the cathedral, with a little help from Victor Hugo’s The Hunchback of Notre Dame, has become a symbol of France. And it has been through a lot! Notre Dame survived a Revolution and BOTH World Wars.

Did you know Napoleon I was crowned emperor there? The cathedral is now an UNESCO World Heritage Site, used for major ceremonies and national celebrations. Beloved by the French and tourists alike, it is the most visited site in Paris – with more than 13 million visitors each year.

What caused the Notre Dame fire?

Investigators have decided that the cause of the fire was most likely an electrical fault from machinery, rather than a cigarette butt, as some had thought. The fire started at 6.20 in the evening after work on the renovations had ended for the day. The cathedral burned for 15 hours in total.

My Private Paris Co-Founder & President, Marie Segura, was interviewed on live television during the fire

How the fire happened

The blaze started in the attic, a complex series of supporting beams between the building’s main lead roof and the chapel’s vaulted stone ceiling. Nicknamed the ‘forest’, the beams were made of 800 years old wood, so burnt very easily. This then meant a large part of the fire was concentrated under the lead roof and the spire, which ultimately fell.

When the spire fell in, the draft caused all the doors to slam shut and a fireball went through the attic, where the firefighters had been working. The chapel’s stone ceiling prevented a huge amount of damage to the building, taking the impact of the spire and lead roof (which weighed 210 tonnes) falling in. If this vaulted ceiling had fallen in completely, much of the cathedral’s walls would have too, since it depends on the cathedral’s walls and buttresses for support.

After the spire fell in, the firefighters had to leave the roof and move instead to try to save the towers. If the bells inside the two towers were to fall, it would completely destroy the towers and potentially the entire cathedral’s structure. Luckily, they succeeded, and both the North and South towers were saved. Also, Bourdon Emmanuel, the largest of Notre Dame’s 10 bells (each with their own name!), was not damaged.

More than 500 firefighters, along with countless policemen and other helpers, fought to save the cathedral. Only one firefighter and two police officers were injured, despite facing falling lead and fireballs.

What survived the Notre Dame Fire

A more positive part to our update on Notre Dame! Sadly Notre Dame’s spire, or ‘Fleche’, which was added in the 19th century and measured 305 feet, was destroyed. However, the rooster reliquary at the very top of the spire and containing a piece of the Crown of Thorns was found in the rubble, only a little damaged. The whole Crown of Thorns, previously held in the cathedral’s treasury, was also saved. The famous Notre Dame organ – one of the largest in the world – was not burnt but sustained a little water damage. Due to previous fire drills, the firefighters knew not to spray the hot stained-glass windows with too high pressure. This meant that the three rose windows, made over the course of the 13th century, sustained damage but were still intact. One has been dismantled to avoid risk of being damaged further during the repair work. A human chain of firefighters, police and municipal workers brought relics, art and artifacts to safety while the fire blazed. Any paintings that were damaged by the smoke have been moved to the Louvre for restoration. In a stroke of luck, only days before the fire, various statues, including those of the 12 apostles at the base of the spire, were removed from the roof to avoid damage during the renovations of the spire.

And now for one of our favorite stories of survival from the Notre Dame fire – that of the bees! More than 180,000 of Notre Dame’s bees were housed on the Sacristy roof, metres away from the epicentre of the fire, and where the spire collapsed. However they survived the smoke and are as healthy as ever!

Over the past year, the restoration of Notre-Dame has resulted in new evidence coming to light about the construction of the cathedral. Researchers are now able to determine the original sites of the wood and stones and use radar to see if there are foundations for an earlier church ‘under’ the cathedral. What’s more, they can better understand the various techniques used to design and construct the intricate pieces of Gothic art and architecture. The team working on the renovations have been nicknamed ‘squirrels’! They have to move delicately around the damage, with harnesses to avoid additional pressure on the structure.

The response was amazing too! Philanthropists and major companies from France and across the world came together to donate $1.6 billion to the restoration of this symbolic building. 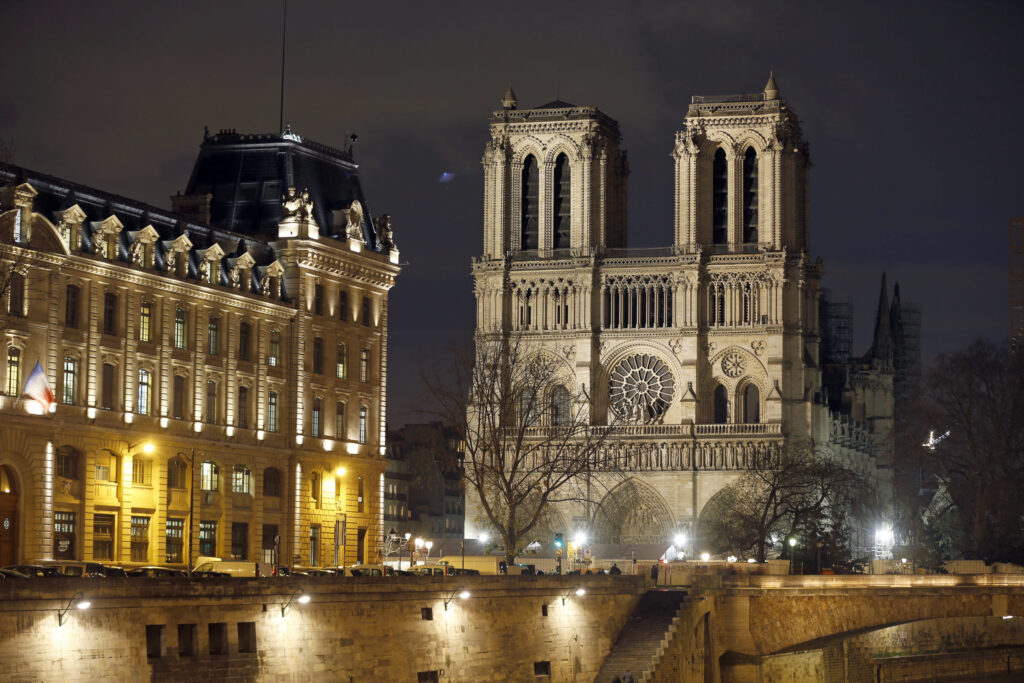 The medieval cathedral is going to be rebuilt as it was, with additional, hidden materials to make it more fireproof. Work restoring Notre Dame cathedral has been halted indefinitely due to the coronavirus lockdown in France, but will continue. While the French President Emmanuel Macron had been hoping that the restoration would be completed by 2024 in time for the French Olympics, it is likely that it will take longer.

Notre Dame recently hit the headlines as thieves were caught trying to steal stones from the site. They took advantage of the nationwide lockdown to break into the construction site, but were stopped by guards at the cathedral, which is under 24-hour surveillance. Last Friday, there was a Good Friday service held at Notre-Dame, the second since the fire. Under the nets erected to catch falling debris, the seven attendees wore protective suits and masks, signs of the fire’s damage as well as these unprecedented times with COVID-19. Streamed across France and the world, its message was of hope and endurance.

We are using Paris’ motto to stay positive for the future. ‘Fluctuat nec mergitur’, meaning ‘she is rocked but does not sink’, is a symbol of strength for the cathedral, and indeed the whole of France.

Traveling to Paris after the pandemic? Skip the hassle of planning – we design & tailor your dream Paris vacation! Request a custom itinerary of Paris here: